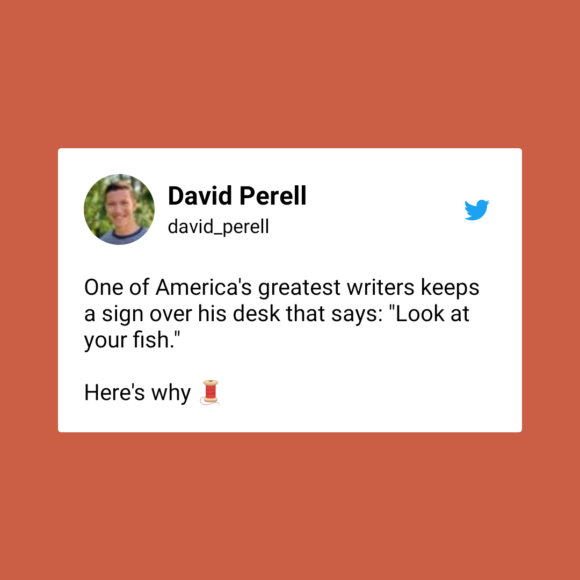 David Perell is without a doubt a talented writer. He even teaches writing and audience building in the course he is currently launching. And as one does when launching, he is creating a lot of content right now.

The other day, David sent one of his newsletters. (He has different newsletter formats, more on why that’s smart later.) It started with a story about a professor and a fish. I read the story and liked it, but I didn’t do anything further with the newsletter email. You know, it was a usual newsletter with some links, some personal info and an ad for David’s upcoming course cohort. I archived the email.

Yesterday I saw a Twitter thread by David that contained exactly the same story. What did I do? Well, this time I interacted with the content and retweetet the thread.

Retweeting something on Twitter is feels more natural to the medium and is less of a hassle than forwarding the email to someone or even take the idea and transforming it into a different medium, e.g. talking about the story on Instagram.

Also, it was easy since the story about the fish was isolated and stripped of the other content that was in the newsletter email.

Today I saw David tweeting a mini essay. As an image. On twitter. That’s very smart. Let me tell you why.

David has understood something that many people who use social media – even some professionals – have not understood. Social Networks are not there to drive traffic to a different source.

David could have linked to his newsletter signup page, his blog, his website, a medium article or another place to let people read his essay. Instead, he put it directly on twitter. Same with the fish story.

When people scroll on twitter, they’re in the mood to scroll twitter. (Duh!) They are not in the mood to switch mediums and read a blogpost instead. Well, some are, but most will scroll past. Maybe gift a like, or bookmark it telling themselves they’ll check it out later. (RIP graveyard of unread articles)

But when I already have the mini essay in front of me, the chances of me actually reading it will be much higher. Sure, I might scroll past if I rather want to read news or watch cat content. But if I’m interested, David makes it very easy.

Most stuff on social media is already microcontent. The funny tweet ☑️ This cooking video on Facebook ☑️That breakfast pic on Instagram ☑️ (remember, what’s valuable is subjective. You might find the breakfast picture boring, others find it inspiring.)

But there is also a lot of content out there that I call „teaser content“. It may be short, but it doesn’t deliver value. Instead, it aims to bring people to a different platform. „Watch my latest vlog on YouTube!“, „read the recipe on my blog!“ „sign up for my newsletter to read the story of…“

You may sprinkle in some teaser content in your #contentstrategy, but whenever possible you should opt for microcontent that delivers some form of value, such as entertainment, a feeling of community, information or inspiration.

So, what can we learn about micro content? (Take David as a wonderful example.)

That’s it. Hope you found the mini lesson helpful. I’ve talked about the principle of micro content vs teaser content in this podcast episode (in German)